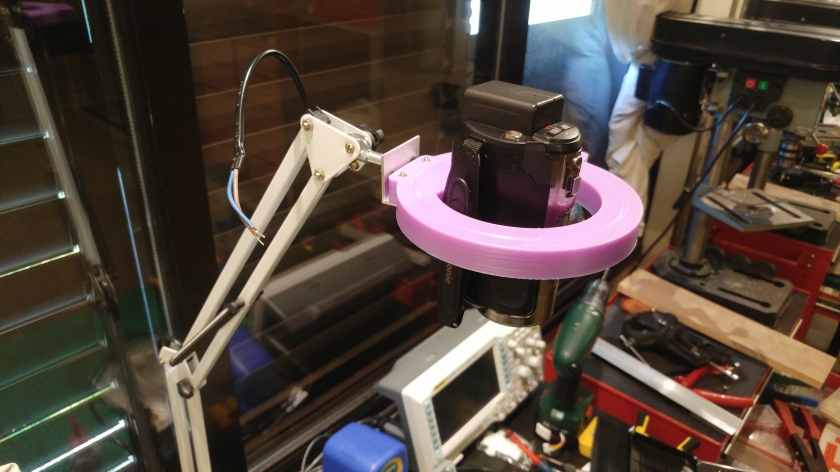 I’ve been thinking about shooting some time-lapses of projects and I didn’t want to have a giant tripod on the desk and have to move it and set it up every time.

An arm from a desk lamp or microphone should provide plenty of movement and viewing angles on the desk and could be folded out of the way.

The problem is That while a microphone or lamp do not care about how they are rotated, the camera does. If I mount the camera straight to the arm, I can get the camera pointing at the desk from almost every angle, but in most of those angles the camera would be upside down.

What I need to make this work is to be able to rotate the camera without moving the arm.

What I came up with is a circular camera mount and a clamp that goes over it. The camera can rotate freely in the clamp while being captive inside of it, allowing me to level the frame while not worrying about the camera falling off.

Fortunately, tripod screws are common 1/4″, so a generic short one did the job nicely. I left enough opening in the clamp so that I could turn the screw without taking the inner part out.

In order to mount the clamp to the arm, I drilled some holes in a piece of angled aluminium to fit the original rotating mount and the clamp.The printed part was fitted with 5mmX5mm M3 knurled nuts that were installed using a soldering iron.

Done! a simple solution and it works. Now I can get great footage from every angle.

I left the wires from the original lamp and i’ll use them to power an LED ring later and maybe charge the camera.

The files for printing are available for free on Thingiverse.